Finally, I’m returning to reviews (even though I read this over a month ago, I’ve only had time to finish it this morning!), as life begins to return to normal for me. 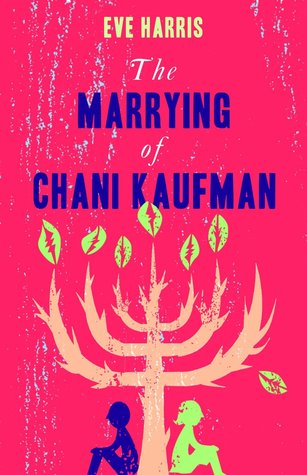 This is probably the Booker Long-listed novel I was most excited about when the list was announced, but it took me a long time to actually track it down. I’m not entirely sure why, but I tend to be drawn to reading books with either Jewish authors or subjects (as you may have noticed in my year of 100 books!). The Marrying of Chani Kaufmann depicts the run up to, and immediate aftermath of the wedding of two Ultra-Orthodox twenty-somethings and the struggles they go through both personally and culturally (or more often both).

As someone who has no real familiarity with the world of the Ultra-Orthodox Jewish communities of North-West London, I can’t really pass comment on how realistic a portrayal it is, and I have to simply trust to Harris’ own interaction with that world. However with this in mind, I do think that she did a wonderful job of humanising a people who most who non-members tend to find difficult to imagine being part of. From Avromi’s adolescent mistakes, to his parent’s deteriorating marriage and the differences between Chani and Baruch’s families, Harris makes all too clear that despite the fact they have a very different way of life, Charedi Jews are still people with all the same concerns and problems that most Londoners have. She also explains, through the method of Chani’s marriage preparation lessons, the religious context for some of the aspects of the religion non-members have issues with; the ritual impurity of menstruation for example, or the wearing of the Shtetl (hair coverings for married woman).

That said, she also draws attention to the problems with the oppressive nature of the community. It is Chaim’s consideration for what people will think of him as a Rabbi that is the source of many of the problems within the Zilbermann home, and Mrs Levy’s concern for her family’s social standing that causes friction between her and her future daughter-in-law, however these are hardly exclusive to Charedi families. The tendency towards arranged marriages, the prohibition towards unmarried men and women having contact with each other, the ingrained aversion to talking about sex, and the highly regulated social conventions however, which are more unique, cause almost all of the major problems in the plot,

If I have any criticisms about the book, it’s just that sometimes the time frame is a little confusing. Each chapter is headed with the name of the characters it’s most closely related to, and the year it takes place. Those that take place in the Rebbitzen’s past are straightforward enough, but the problem is when reading about the present, or the recent past. The actual Kaufman-Levy marriage takes place in 2008, at which point the book opens and there are occasional returns to that day, but most of the book takes place before it. Thus it becomes a little hard to tell exactly when in 2008 the chapter is occurring, meaning the timeline appears perhaps a little more fluid than Harris had intended.

The only other issue I have is that the glossary, which explains a lot of the Yiddish or Hebrew terms that are used throughout the book, is slotted in almost as an afterthought at the end, with no warning or indication that it’s there. Most of the terms I was able to figure out, either through prior knowledge or context, but it would have been nice to have known it was there before I was three-quarters of the way through the book.

Of the non-Short-listed books I’ve read from the Booker Long-list, I think The Marrying of Chani Kaufmann is definitely the one that I think deserved to take Five Star Billionaire’s place in the final six. I don’t think it would have been strong enough to win (although I still have yet to track down a copy of The Luminaries. Sigh…), but I do think that it’s one of the most enjoyable and easy to read book on the Long-list, as well as being just a good bit of heart-warming story telling.