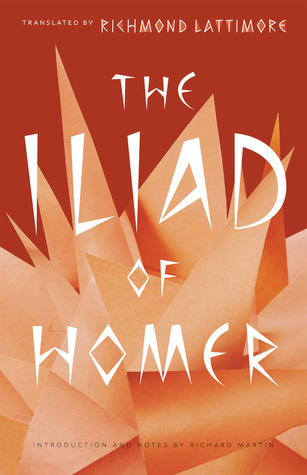 In the month and a half it took for me to read the Iliad, I can’t count the number of times I thought to myself “This whole ‘mythologies’ idea was a big mistake, I’m not enjoying this, I’m not enjoying reading. I can’t believe I’ve still got another 11 months to go”. I think this gives a good indication of how I felt about the experience.

It’s not that it’s a bad story. Quite the opposite, because the concept of the Trojan War is really interesting, as are the various interplays between the gods and mankind, the Trojans and the Greeks, and Achilleus and just about every living person on the planet. The problem is all the other stuff.

It’s the fact that it can take multiple pages for a single character to travel a hundred metres, because we’re forced to read mini panegyrics for every never-before-mentioned character that he mows down. It’s the fact people can give long speeches without saying anything because they’re too busy blustering or boasting to get to the point. It’s the fact,  though I’m not sure if this is a translation issue or an artefact of the original that sometimes you have to read a passage multiple times to understand because the text is so obscure. It just doesn’t make reading fun, and while I’ve never been one of those people who rails against “the classics” because they’re too hard to read, I did end up feeling this way about the Iliad. Which I feel should make me feel a little bad, or uncultured, or something like that, but somehow I just can’t. The story is good, and the themes are, I suppose timeless, but the telling of them has become quite outdated, and as someone that is used to reading things composed to be read, not heard, I just couldn’t keep up with it.

The other side of the problem is that I knew almost everything about the story going into it. The tale of the Trojan War is so famous that I didn’t feel as though the return I got from reading the book was worth the amount of effort that I invested in it. There were occasional parts that stood out as being new to me, and these were generally the parts I found more interesting: Hera distracting Zeus by seducing him and allowing Poseidon to intervene in the course of the war, Thetis coercing Hephaistos to make wonderful armour for her son Achilleus (an episode which is mirrored in the Aeneid actually, further proof of Virgil’s lifting scenes from Homer), and of Ares and Athene’s constant feuding, all stood out as highlights for me. It’s no coincidence though, that these episodes are all concerned with the gods, rather than the Greeks or the Trojans, because this is the side of the story that isn’t emphasised in modern tellings. For whatever reason, everyone has heard of the main heroes on both sides of the war and they probably know that the gods were involved, but I, at least, was under the impression it was more along the lines of  subtly guiding things from the top of Olympus, rather than taking an active role. So it was interesting to find these things out, but I wish they had played a bigger role in the story.

Unfortunately, these interesting parts were not enough for me to enjoy the book. Nor was the fact that I genuinely liked the character of Hektor. Even though he is as flawed as the rest of the heroes, he is less prone to arrogance than Achilleus or Agamemnon, and instead his faults come from an overdeveloped sense of honour and duty. Achilleus himself was interesting, because at times he was infuriatingly stubborn but at others he seemed entirely rational. When you factor in the fact that the style stripped almost all of the emotional markers that we would today recognise from the dialogue, it meant that it was often difficult to tell which was which, and as a result it was pretty difficult to empathise with him.

I’ve already pretty much said that a major factor in my dislike for the story was the transaltion. Like the version of the Aeneid that I read, Richmond Lattimore has created a text that retains the poetic structure of the original Greek as much as possible. This is partly why I chose it (though I did so before I started the Aeneid. Perhaps I wouldn’t have done if I’d waited!), but the main reason was that Lattimore also translated the version of the Odyssey that I read for A Level, so someone I was familiar with. I had thought that the Odyssey was hard to read because of the fact that I was reading it for school and had plenty of other things to be doing at the time. I was wrong. It’s because Lattimore, for all its possible merit, has created an impenetrable translation. At times it’s beautiful, the opening lines being the best exhibition of this, and I have suspicions that if it was read aloud, as the original would have been, it would be much easier to appreciate, but it is also dense, at times obscure, and always hard to read. In part this may be because of the way it’s presented on the page, an issue of the publisher rather than the translator, but I do also think it’s a fundamental flaw in the text itself as a work for common readers rather than scholars. Although to Lattimore’s credit, and unlike Day-Lewis, I didn’t notice any suspicious or anachronistic word choices. I feel like I should make not of the fact that Lattimore has made an odd stylistic choice when it comes to transliteration of names, which you may have picked up on in this review. Rather than using the conventions that most English speakers would recognise, he has stuck to more Hellenic looking equivalents. The main culprits are Achilles and Hector, which he renders as Achilleus and Hektor. I can’t condemn him too much, as I always find myself spelling certain words with the same convention, a throwback to overuse during my A Levels, but as a reader familiar with the more traditional rendering, it does stand out.

I don’t really know what else to say. Yes, the Iliad is part of the foundation of Western literature and storytelling, but it’s also dry and convoluted and not fit for casual reading by today’s audience. I definitely wouldn’t recommend reading this version unless you’re a masochist desperate to experience as close to the original as you can, though I can’t say for sure that any of the more prose-y translations will be any better.