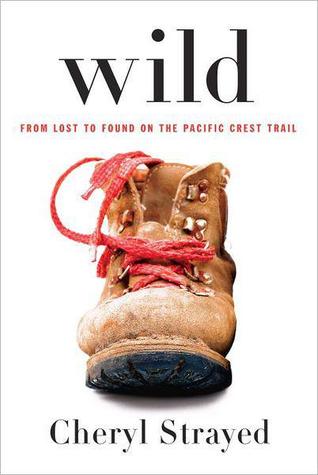 Wild isn’t what I would usually class as “my sort of book”, for no reason other than the fact I don’t often read non-fiction work, and especially not memoirs. In fact, despite the fact that when looking for inspiration of books to read this year someone had suggested it, I had turned my nose up at the idea of it. After seeing, and enjoying, the film, I changed my mind.

I’m not entirely sure what I was expecting to get out of the book that I didn’t get from the film, but I was enchanted by the cinematography and the frequent use of Simon and Garfunkel in the soundtrack. Not really a glowing recommendation for a book. Luckily the actual story was good enough to make it worth reading. There’s a lot that made the transition from page to screen mostly unchanged. Some of the actual events have been rearranged, or changed for a narrative purpose. Similarly a lot of the people she meets on the way are cut to make the journey seem even more isolated, but in general the key elements of the story are maintained.

What there is a lot more of is the story behind the story. Strayed’s relationship with her mother is the driving force behind the book. This is made clear in the movie through the medium of flashbacks, but it has a lot more impact when told in her own words. Not limited by the restraints of run time or a purely visual medium, she tells the reader a lot more about her early childhood and the trials and challenges her family went through, and really this make the book worth reading, even if you’ve already seen the film.

A lot of the other reviews that I’ve come across for the book have been at one of two extremes. Either the reader loved Wild, and it’s inspired them to go for a hike or they’ve emotionally resonated
with Stayed, or for some reason, they’ve hated the book. It’s the latter group that have bothered me somewhat, because they tend to exhibit a vitriol you don’t often see in book reviews. Okay, I know I’m the person that wrote this review ofLabyrinth, but generally people don’t get too worked up about books they don’t like. The exception to this rule, I suppose, is when there’s a high profile adaptation. See:Twilight, the Hunger Games, The Fault in Our Stars… A Song of Ice and Fire…? Hmm. Maybe this only applies to books which are written by women. Because that’s the crux of it. In these reviews, Strayed gets a lot of criticism for her own of preparation for the PCT. For the fact she talks about fears for her safety when encountering creepy armed men or provides physical descriptions of other men she meets on the trail. For the things she does in the years after her mother death. For the fact that she had a breakdown after her mother died. It’s no surprise that most of the reviews I saw came from men, with most of the negative reviews I saw from women either focusing on her drug use, or admonishing her for not being a clean cut and wholesome lady.

I’m not going to pretend that at times I didn’t find Cheryl annoying or wish she made better choices, but I don’t think that this is the best way to approach a memoir. It’s fairly well publicised what this book is about both in the blurb and the media, and if you can’t get through the book without wanting to mansplain to her why she’s unprepared to walk a thousand miles, or judge her for not reacting to grief and bereavement well, then I think it says more about the reader then it does the book or the author. This is especially important when it comes to non-fiction, because like it or not, there is an element of sexism in the way these reviews have responded to Strayed telling what is a very personal story. Not that any of this really surprises me, but until this doesn’t happen, it’s worth drawing attention to.

Wild is an enjoyable read, and a beautiful film, and even if you don’t normally read memoirs or travel writing, I think it’s quite a good entry to both genres. Certainly I’m feeling more open to reading more than I was before I read it.